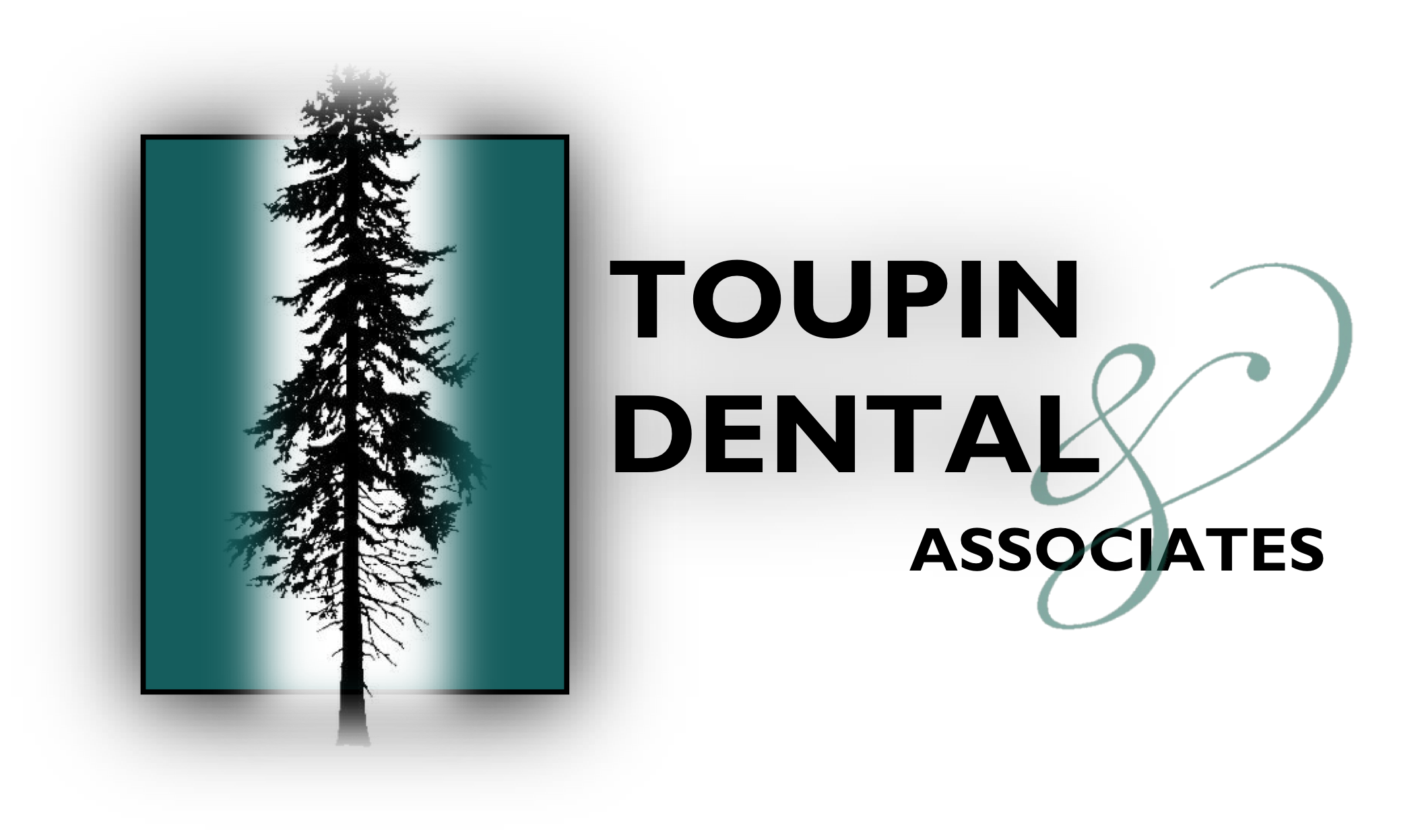 Our dentists and dental team are extremely caring. Each of doctors strive to make your appointment as easy and comfortable as possible. They are genuinely concerned with your health and are aware that your time here is valuable and your comfort is extremely important. 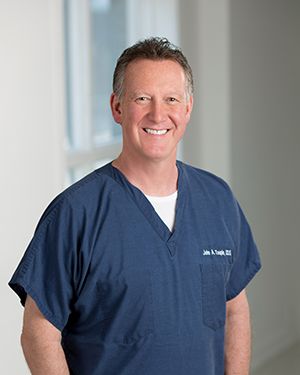 Dr. John Toupin was born in Marquette, Michigan — a small city in Michigan's Upper Peninsula. He was raised in neighboring Ishpeming, where he graduated from Ishpeming High School in 1976. He is most proud of winning the state football championship by defeating the Hudson Tigers, who at the time carried the longest high school winning streak in the country at 72 games.

After high school, John attended Michigan Technology University where he majored in pre-med. He was active in many organizations, and greatly enjoyed playing trumpet in both the jazz and pep bands. He was also active in his fraternity. John graduated in 1980 from Michigan Tech and moved to the Detroit area to attend the University of Detroit School of Dentistry, class of 1984. After graduation, he practiced dentistry for a year with his family dentist in the Marquette area. In 1986 he moved back to the Detroit area where he began a dental practice with his twin brother Joel.

Dr. Toupin has treated patients from all age groups. He has also treated several Detroit Red Wings hockey players and their families. Both he and brother Joel have been listed in Hour Detroit Magazine's "Top Docs" issue for the past several years.

John lives in Novi with his wife, Jeanne, and their children. He loves outdoor activities including golf, tennis, and is an avid skier. He has a passion for exercise and loves a good hard workout. He enjoys listening to talk radio, jazz music, and watching all local college and professional sports.

John's dental philosophy over the past 25 years has been to treat everyone as if they were a part of his own family. He is very personable, kind, caring, gentle and practical. He listens to his patients and works together with them to specifically meet their dental needs and cosmetic desires. He enjoys spending time with his patients, laughing and making them feel comfortable and at ease. His outgoing personality, compassion and care for patients has been the foundation for his successful practice. 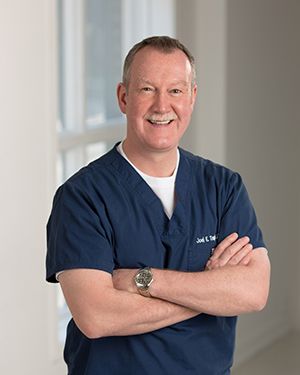 Dr. Joel Toupin was born in Marquette in Michigan's beautiful Upper Peninsula. He was raised in the neighboring town of Ishpeming where he graduated from Ishpeming High School in 1976. He was active in many sports and played trumpet in the high school band. He is also an avid skier and enjoyed many other outdoor activities.

After graduation, he attended Michigan Technological University in Houghton, where he majored in pre-med. He was active in the jazz band, pep band, and also in his fraternity. After graduation in 1980, Joel moved to the Detroit area to attend the University of Detroit School of Dentistry where he graduated in 1984 with his DDS degree. He then applied for and was accepted to a General Practice Residency program for one year at Illinois Masonic Medical Center in Chicago, where he had advanced training in dental trauma and emergencies, hospital medical protocol, and hospital dentistry. He assisted oral surgeons in the operating room doing advanced oral surgical procedures, treated pediatric patients in the hospital setting with a pediatric specialist, and also treated handicapped patients, both in-patient and out-patient. It was truly a fantastic learning experience.

Joel lives in Farmington Hills with his wife Ann of 20+ years, their three children, and pet dog. He enjoys many outdoor activities including golf, camping, trips up north, and skiing. He still plays the trumpet in the church choir at Our Lady of Sorrows parish, where he is an active member.

Joel treats all of his patients with personalized care and makes them as comfortable as possible. He treats everyone as if they were family and loves to share jokes with his patients. His fun and interactive way with children helps to make their visit easy. All of these attributes have helped his practice become successful. 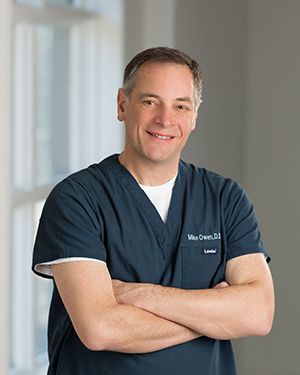 Dr. Mike Owen was raised in Harbor Springs, Michigan. While not in the Upper Peninsula, Harbor Springs is far enough north that his partners in the office have graciously bestowed honorary Yooper status on him. While there, he was involved in many sports and began skiing at Nub's Nob at age two. Being raised on a horse farm allowed him to spend many hours raising, training, and showing Arabian horses, and to develop some good shoveling muscles.

His college career was spent at Michigan State during the glory days of Kirk Gibson and Magic Johnson. It has been said that they benefited greatly in their athletic endeavors from the schooling provided by the young Mike Owen. Mike graduated from MSU in 1981 with a degree in zoology and psychology and continued his education at University of Detroit School of Dentistry. He officially became a DDS in 1985. He practiced dentistry in Harbor Springs for about five years and has been in the Metro Detroit area since then. He pursued advanced training in the field of implant dentistry and was awarded special recognition in that field in 1997. Dr. Owen has been actively involved in implant dentistry since 1991.

He rekindled his friendship with the Toupins and joined them in dental practice in 2009. Dr. Owen has been a leader in organized dentistry for his whole career, and has twice served as President of the Michigan Academy of General Dentistry. He is currently the national Chair of Membership for the AGD, and his duties take him to many destinations throughout the country while serving the profession.

Mike has lived in Novi since 1995 with his wife Maureen and their three children. Their lives revolve around a variety of sports and their continued passions for skiing and travel. Now that two of their kids are in college, they hope to be able to do even more of that in the future.

Mike has always prided himself in treating all of his patients with a calm understanding and a gentle touch. His desire for each of his patients to have as perfect of a smile as possible has helped him have a loyal following of patients, many of whom have been with him for nearly his whole career. Using dental implants, cosmetic procedures, and complex restorative procedures has become second nature to him over the years. He really enjoys helping his patients improve their lives and their confidence in themselves by giving them the smile they deserve. 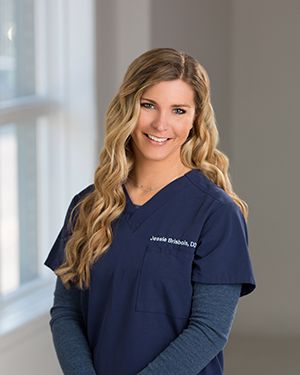 Dr. Jessie Brisbois (maiden name, Gillis) was raised in Farmington Hills where she grew up with her five brothers. She graduated from Farmington High School and then attended Lyman Briggs College at Michigan State University. She received a degree in Human Biology and a month later began her education at University of Michigan School of Dentistry. During her time there she was very involved in pediatrics and held the position of Vice President in their pediatric club. After realizing her passion was not exclusive to pediatrics she graduated with her DDS degree and decided to pursue General Dentistry. Although some may now label her as part wolverine—she denies it and will always be above all, a Spartan who bleeds only green.

Jessie now lives in Farmington with her husband Kevin and chocolate lab Moose. She continues to stay active in organized dentistry. She is a board member for the Michigan Academy of General Dentistry and currently holds the position of the Editor.

Dr. Brisbois has immense care for her patients and a passion for the field. She prides herself in her meticulous work and her ability to make anxious patients feel as comfortable as possible. Her friendly personality, eye for esthetic dentistry, and genuine interest in her patients and their desires are what fuels her success as a provider. 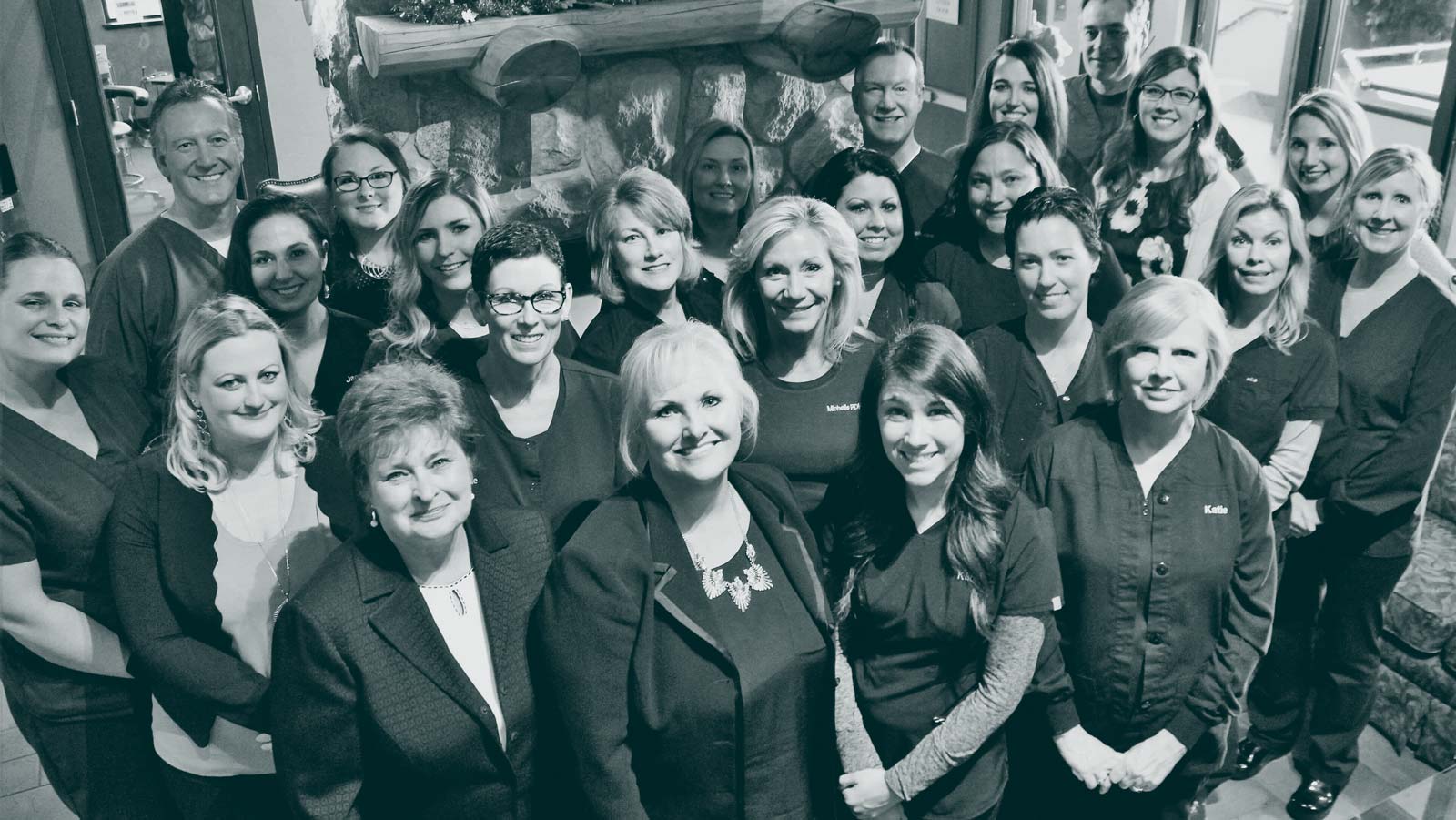 "All the workers are kind and friendly. The dentists are knowledgeable, helpful, and nice. I highly recommend this place to everyone."

We are located just North of 12 Oaks Mall on 12 Mile Rd. in Novi, between Meadowbrook & Novi Roads.